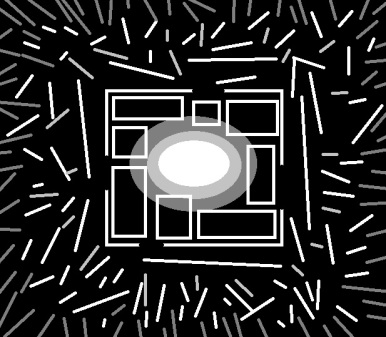 I dreamed that we were on the distant fields; five people in a yellow bus, we had some kind of friendship or even relatedness. In silence we were letting behind the city (a human order) for something different, the fields without farmers were the threshold. The bus crossed it finally towards the darkness like a person fall asleep almost without notice it. We saw that a person (one of us?) has been, alive, disincorparted around the body of the bus. We saw it as something provided because we knew we were in hell, or at least was provided that those things were what one had to expect from hell.

The geography was populated for demons. They were not dedicated to punishments but to play like puppet masters with anything they found in that visceral land; a place where they could do whatever they wanted without meaning nor purpose; or no one we, as human beings, could infere.

We felt persecuted, there was a girl in the group and I think we tried to protect her. We delve in the hell, into its heart, and we sensed that if we were closer to its core we could be safer. The yellow bus was in the past, we walked and saw a supermarket, which was a representation of an ascending order in the hell, and at that point we knew for sure that we would be protected because Satan did not allow chaos or disorder in their presence. To be accepted we bought some banal things with a few and little coins, the demons there, driven for their inner fear, were silent and even diligent. We got closer to the center and Lucifer was not a person but a spherical beam of white light. He (I thought it as a “he”) did not inspire neither fear, admiration nor devotion, simply we knew we were in the presence of an angel.

End of dream. Morning of November 28, 2013. I don’t believe in hell, and that day my brother’s lil white cat died, that was a hell.