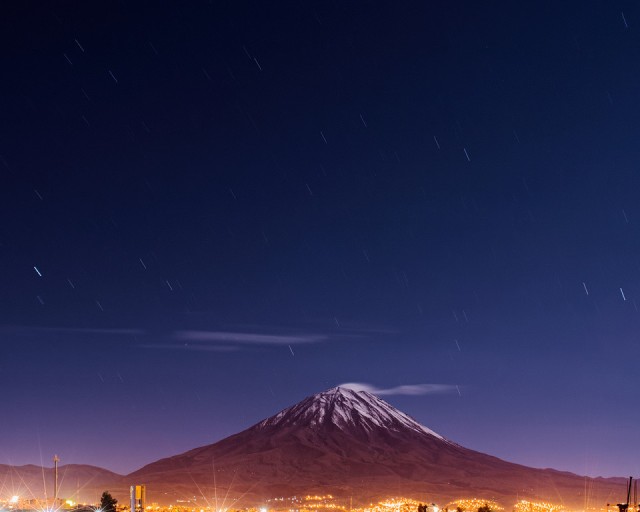 To understand the cities in the country were was the Inca Empire one has to know first a bit of the mythic origins: in few words every people is bonded to a determined place. This place can be a mountain, a lake, a rock, an island. In the mythic origins the humans were produced from these places, whose names are pacarinas.

In this believing there not exist a god or gods creators. Instead there are a lot of human groups that take care of a pacarina. There are some more important than others, in the case of the incas it was first a hill called Tampu Tocco. Inca Garcilazo de la Vega (son of an Inca princess and a spanish invader) wrote about the Titicaca Lake as the mythical pacarina but that could be a distant mirror of the old times before the incas came to once would be the imperial city Qosqo (misnamed Cusco or Cuzco).

My apu is called Huaynarroque, for example. The volcano in the photograph is called Misti that means white, perhaps in an analogy similar to the Mount Kilimanjaro. But I think that If it is an apu is one very recent.

An apu more than a god is a living ancestor, I hope that tradition survive our incipient modernization, but sadly the news about invaders in sacred places are not uncommon, and the worse is that they are not poor people but people that wants the easy way to do the things.

Usually the apus have crosses on their tops. That was a way to mix religions I suppose, so they are old crosses, I want to believe that they were put in there without violence, but the invasion wasn’t one peaceful but was our end of the civilized world. Fortunately something new was born and is something real that every civilization has its moments and declines but always its apparent destruction is important to build something sometimes better.