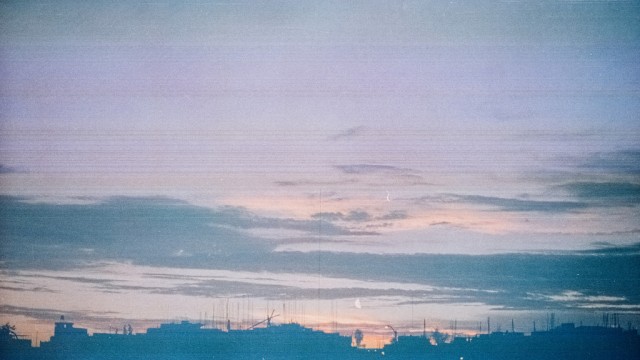 I’m still experimenting with the Canon EF film camera, and with rolls of expired Kodak ProImage 200. I saw Mitsubishi and Samsung rolls so I’ll give them a try.

What you are seeing is actually a double exposure: two different images projected in just one single frame of film. With the Canon EF I can shoot multiple exposures, not just two. In this case I mixed a sunset with the moon (it’s the white shape above the tree almost in the bottom middle where was previously the sun) It has a nice result: the blue sky has mixed and colored with blue the shadows and clouds and give to the warm sunset tones a cool effect IMHO. To put the moon in that specific place I used the aperture marks in the viewfinder as a guide. If it would be a slide I would have to change the ISO to compensate but with the negative latitude that’s not necessary.

Well, it has to be a nice photograph because it was EXPENSIVE, lol. You’ve to buy a roll, take it to the lab, import batteries and a long etcetera. I am not sure if the longitudinal marks are from the camera (I think not) or from the lab (perhaps) or from the expired film (I hope so)

Anyway, I’ll see if I can take sea photographs, tomorrow I’m travelling to the coast. It would be fantastic to go to the beach a bit ;-)