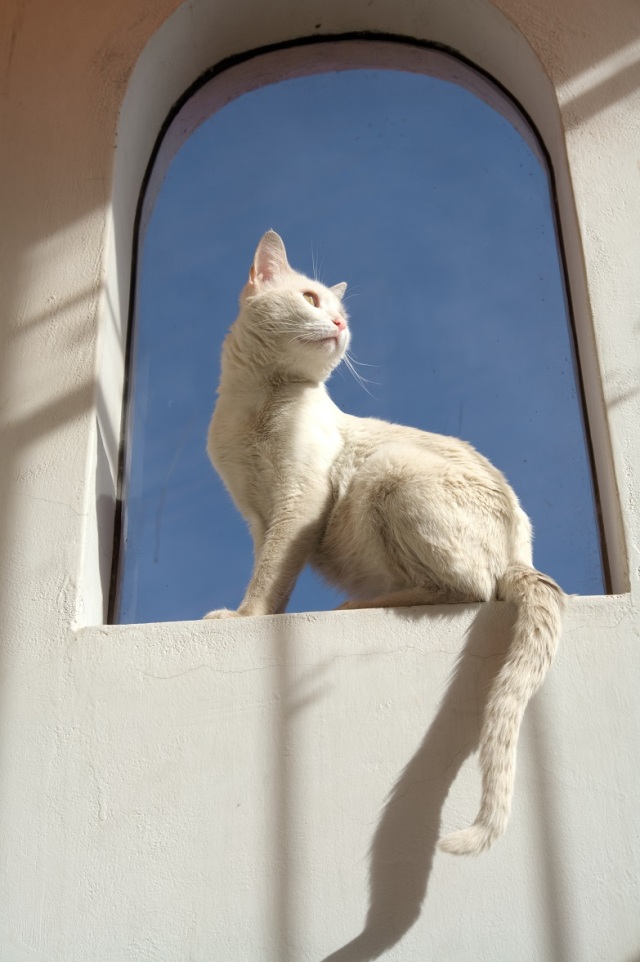 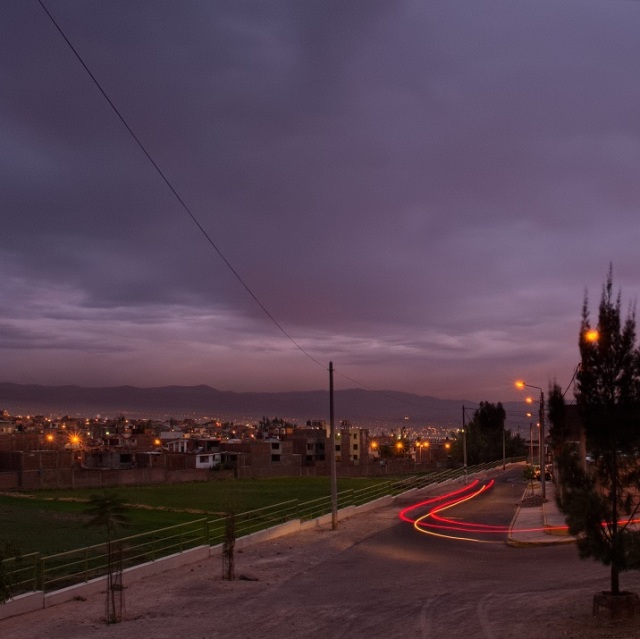 These days I prefer mysteries instead of explanations. There is a shadow that starts to get bigger. I have always these moments in which I prefer to just don’t hear nor see. To rest. I hope to travel the next week and besides to take some photographs. Actually that’s my main reason to take photographs: to get a moment alone with me, something like an introspective meditation. 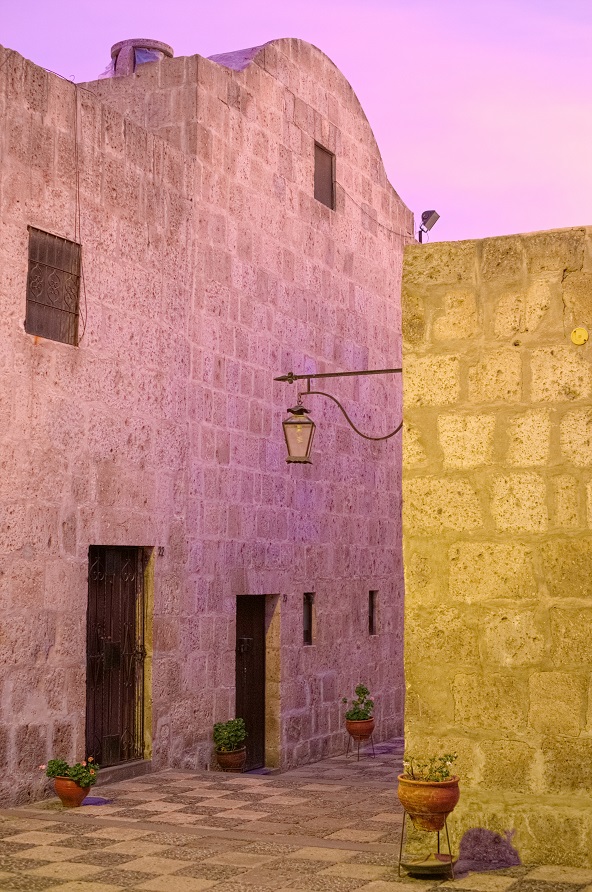 White color in architecture although it could be felt a bit lifeless actually can be very animated if there are two conditions: there are alive elements as plants and if you study the game of volumes with artificial and natural lights.

Now if you want to really take advantage of white walls then you have to let the colors of sky tint them with every gradation of red, purple and indeed every colour you can find in the nature. And also are the artificial sources that even can mirrors your mood.

This was taken in Compañía de Jesús cloisters. It’s a place quite silent despite its location in the centre of the busy city. 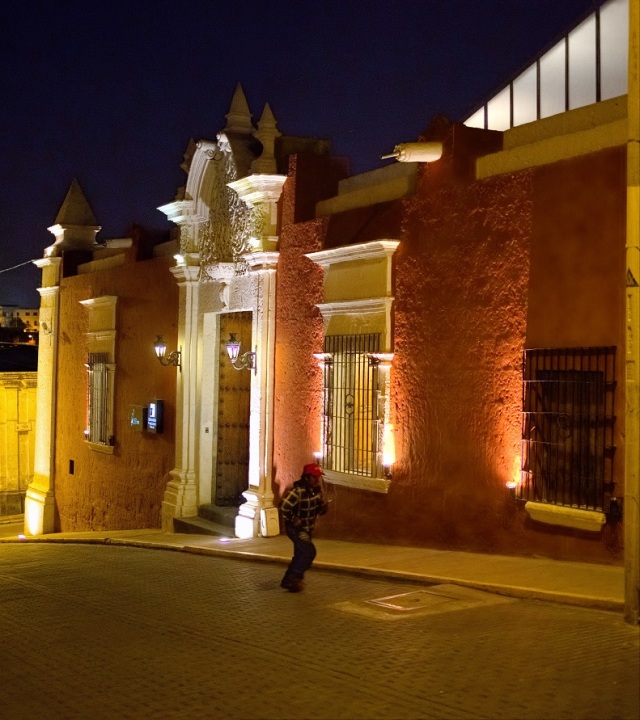 The building in the background was the palace of an old aristocratic family. Now it’s owned by a Hotel. That’s great, the building is still alive.

One day I went to Tacna city so I thought in travel to Ilo City, it’s located in a harbour of the Pacific Ocean. Probably it was one of the places where ships from the Inca Empire went to travel to the Antarctic. The sunsets here are quite amazing but only in Summer, the rest of the year it’s with fog and clouds, that day I hadn’t luck but that happens, so instead to rant I took some photographs of the landscape.

In the end the hidden sunset tinted the day with a soft red. Time to travel again.

In first place thanks to every follower that had the patience to bear my football posts this extraordinary month with the World Cup Brazil 2014. Thank you dear reader.

And thanks to the anonymous visitors that read my words about our shared passion. You and me are in the same brotherhood, thanks.

I love football because it’s fair and it’s funny. You don’t even need a ball or shoes, you can shape some rags in spherical shape and run with your naked feet. You can play it alone, you can play it with another person, you can play it with ten more folks against eleven and you have a team. Basically you can be the goalkeeper, a back or an attacker. And you are ready to go!

It’s a team work, but in few moments you can have inspiration and be invincible (the word comes from Latin invictus and means that you can’t be defeated) and just run with nobody able to stop you, you are wind and you are divine when you get the goal.

So, goodbye till Russia 2018!!! Brazil 2014 was the best World Cup in several editions so I hope Russia can follow that spirit :-)

Tomorrow will be my last post, I promise you. Or at least my last post about the World Cup, LOL ;-)

To sadness to every Brazilian that hoped to a humiliating Argentine defeat… Well, that didn’t happen. Argentina played well, they fought till the end and they could have won.

I love the old jogo bonito from Brazil, I really want to see the old magic in the great Brazilian players, but I’ve no much love to people that have childish behaviour and just prove that they doesn’t mind to see good football, just want an excuse to destroy or to insult. I am sorry to write it about Brazilians but they have demonstrated to be selfish laughing about the previous Argentine sport defeats, they even write in Spanish chat forums, I haven’t seen any other country here that do something like that, the football archrival of Perú is Chile but save some few guys that have a disgusting behaviour this don’t get the Brazilian levels, I haven’t seen this behaviour in the Argentine side with the public Brazilian scale. I know, or I wish, they aren’t majority but I don’t find another country in South America with a more unfair attitude. The disturbs before the World Cup and after the fall of the Brazilian team (when the Brazilian team needed more from their “supporters”) is something that doesn’t speaks very well from a country with so many contributions to the culture in several fields as music, or architecture for just mention two, and that it’s near to be a great power if they do the proper things. But I hope that if they get to be a regional power at the level they aspire it gets achieved with the idea of fraternity and not supremacy.

I feel they did the same against Uruguay and a little also with Colombia, that irrational side to not applaud the game but ends applauding to cheat and to pretend fouls instead to win playing.

Now, in the moments I write these lines, I read about vandalism in Buenos Aires. I know that probably there is social discontent, but this is not about football, it’s about people in search of any excuse to just be violent. My classmates in school were poor, and we (although I wasn’t rich definitively I wasn’t poor as my friends) never wouldn’t allowed that bad behaviour. It’s the dark side of people that actually doesn’t love football because, as Borges said, they doesn’t care about a nice game of football, just if the team that they “defends” are the winner, they are the ones that think that hurt the rival and fake the fouls are the way to get the goal. I still believe in the beauty of play and see football.