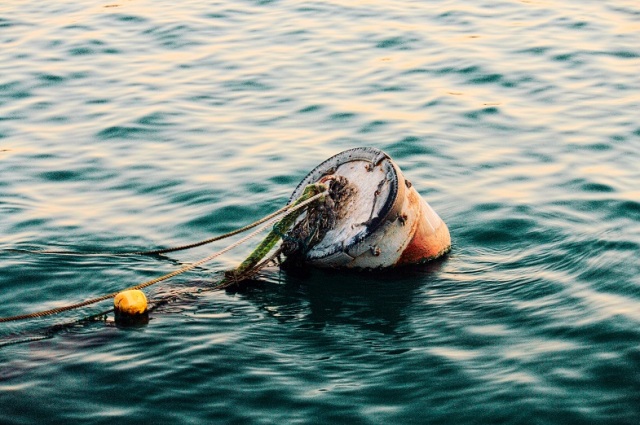 If you are reading this post, in the moment I publish it, from Europe, Australia or Asia then receive my greetings oh great survivor of New Year’s day party! you probably had started the Viking party the year 2015 and continue it till 2016 ♪♫✌

If you are in America or Americas (depending of your school of thought) still we are two and half hours away from 2016. Still we are here. The years go away with the stream of time… I hope you have found something akin to your spirit in my words and photographs of this personal diary, thanks for your visit.

Kind regards from a far away place in Peru and happy new year and hoping you had a nice 2015. 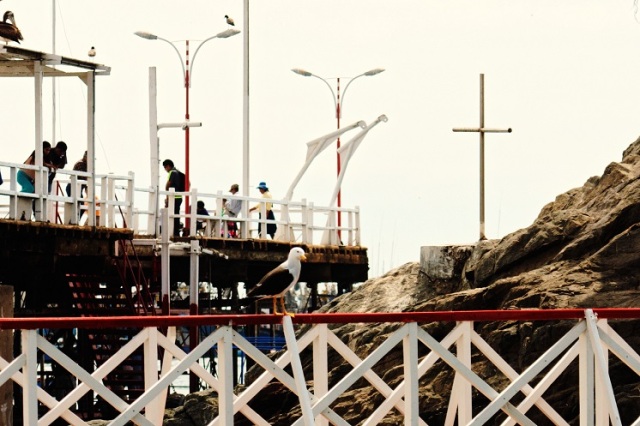 In the elementary school I was very good in the exercise to practice equilibrium over a thin wooden beam to jump to a ring, once I was selected to practice it in public but I was so afraid that I didn’t do anything. Last weekend in the building I designed I had to walk a thin wooden board to set the formwork of a concrete beam, in one side there was five meters of a fall to concrete stairs and to the other side was a fall of ten meters to the neighbour roof. Everything withouth safety equipment…

I felt what I feel when I am lost in the cold of the nature; or climbing also without nothing more than a pair of shoes a jean a shirt and a backpack with water and a camera; or fighting to don’t die in the dangerous blocks. The life suddenly seems a wooden beam so thin and light, so fragile… 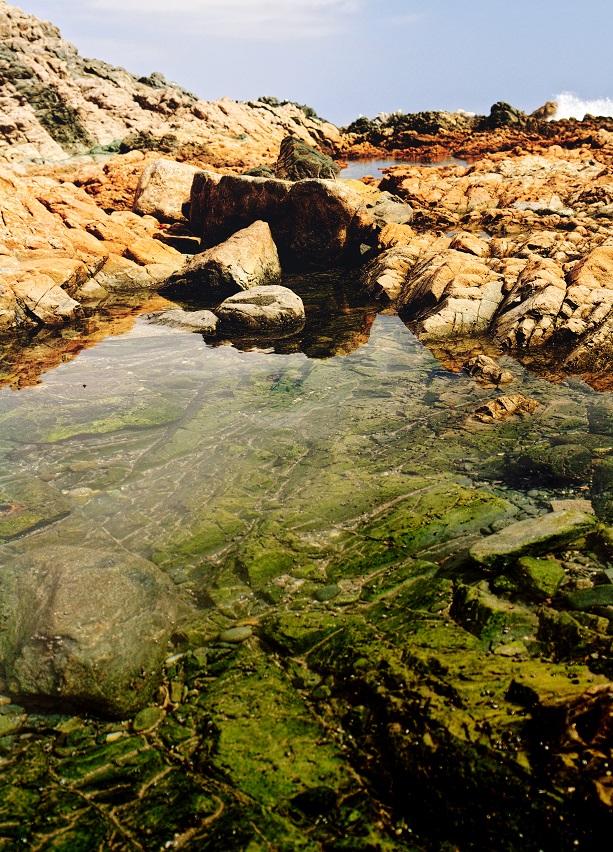 I had already left the part where the Ilo river meets the ocean. I wanted to walk a bit more before the lunch, just because I prefer to use my legs to know the world. This is the chronicle of that walking. 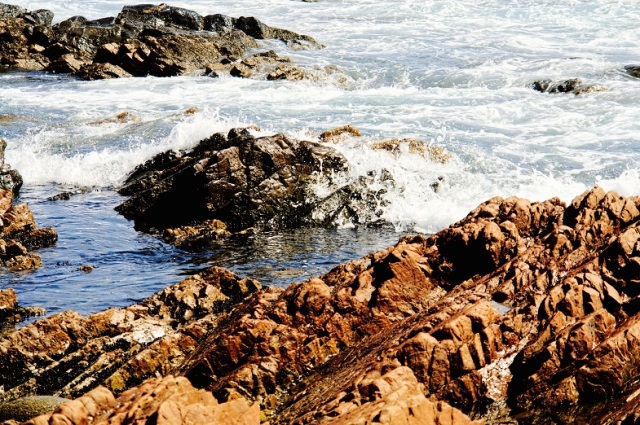 Ilo city has the most beautiful sandy beaches of the Peruvian south, but they are here and there; mostly the shoreline is rocky, mostly a kind of orange, they resemble prehistoric animals coming back to the sea. 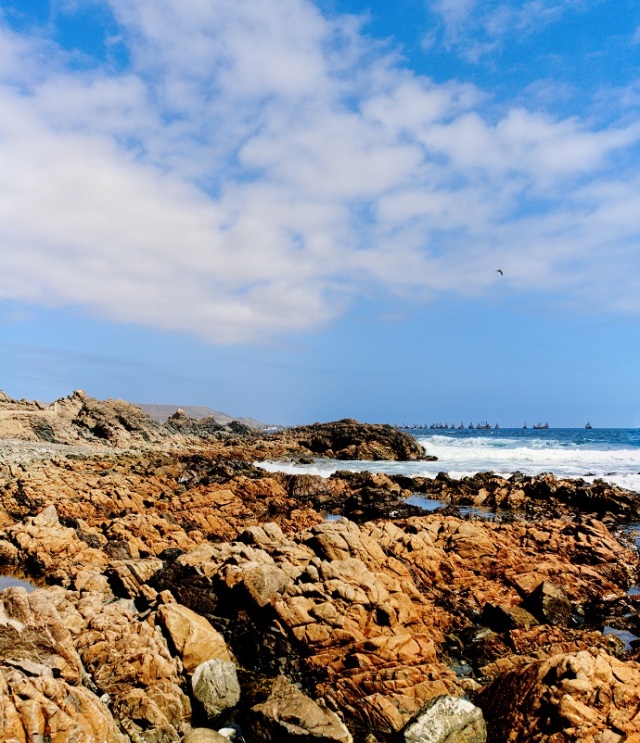 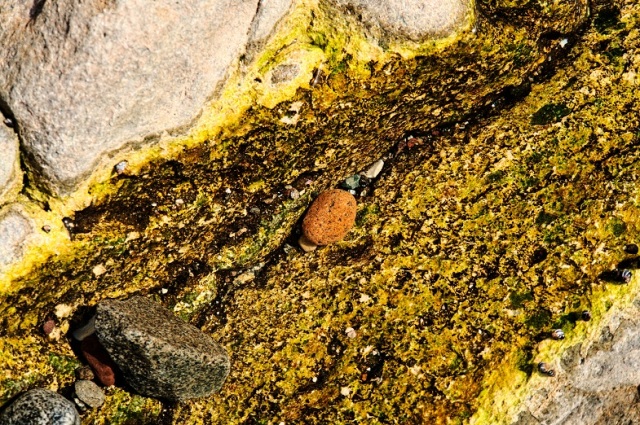 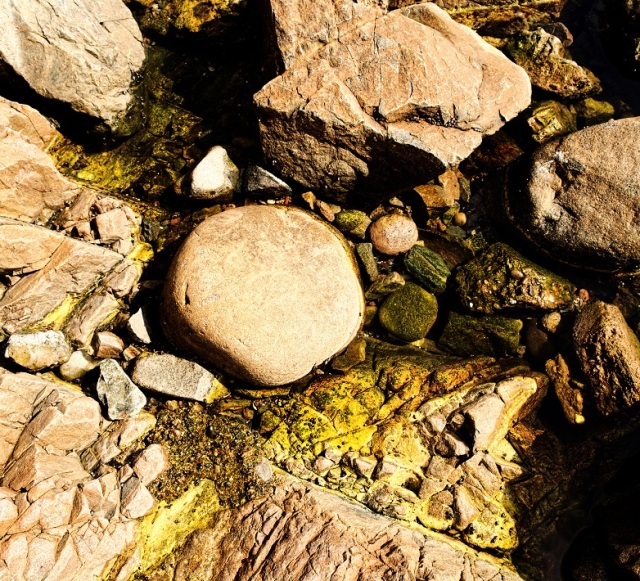 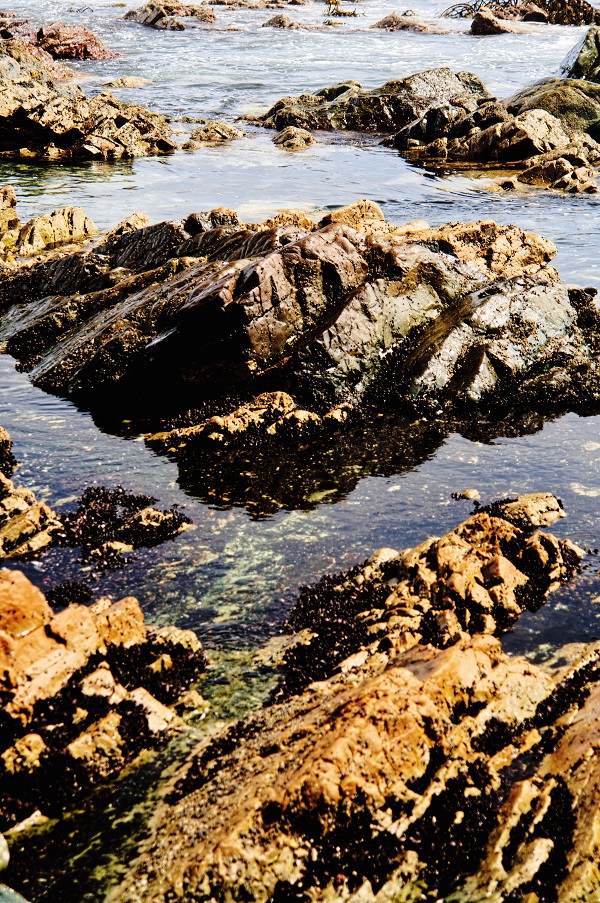 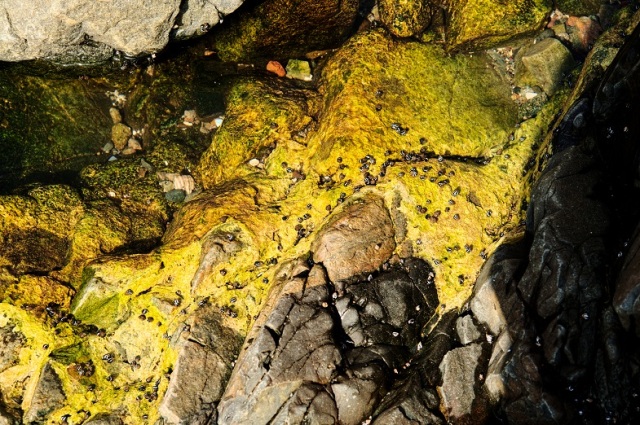 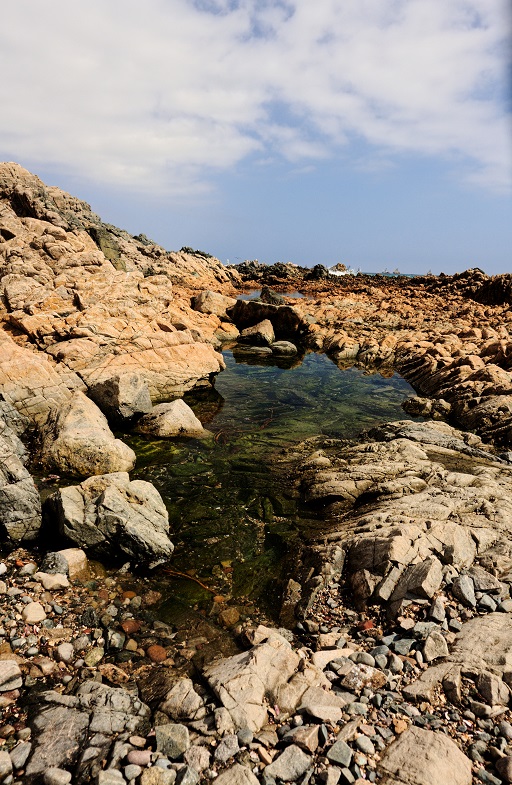 Fracture in the landscape 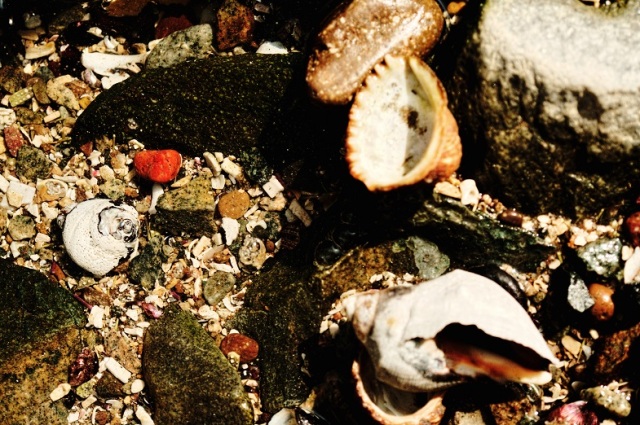 I hear all of you

Machines to hear the sea… 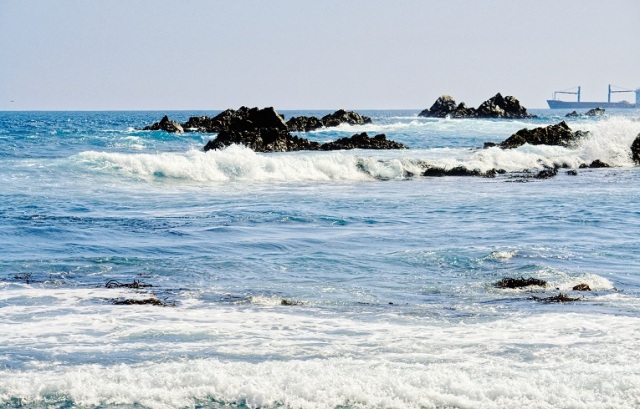 Four against the waves

The sea in Ilo is strange. It has turquoise mainly, but also sometimes it’s a milky silver, a pure blue, the sunset gives to it other palettes. It’s usually pacific. 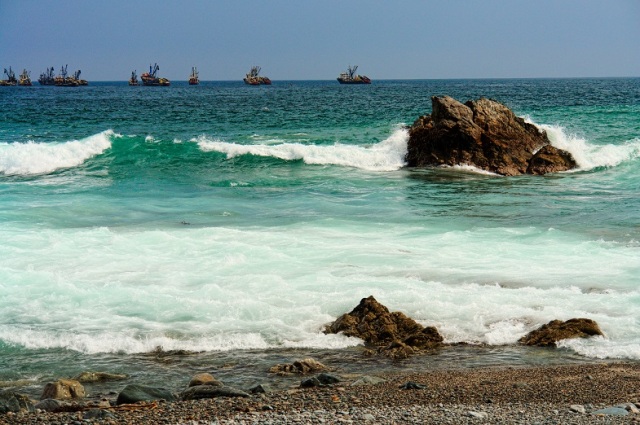 Those days of winter, the water seemed made of ice, you could think in an iceberg melting. 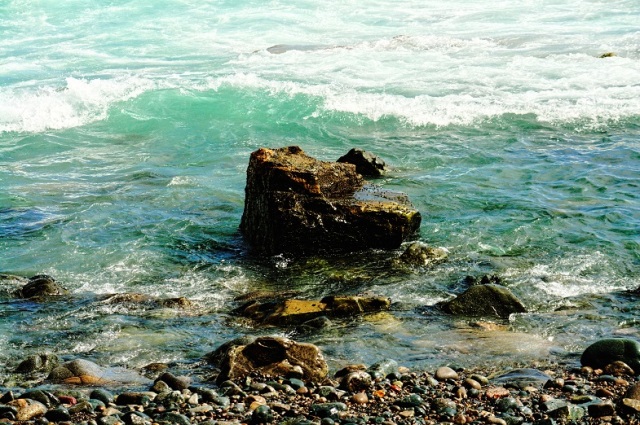 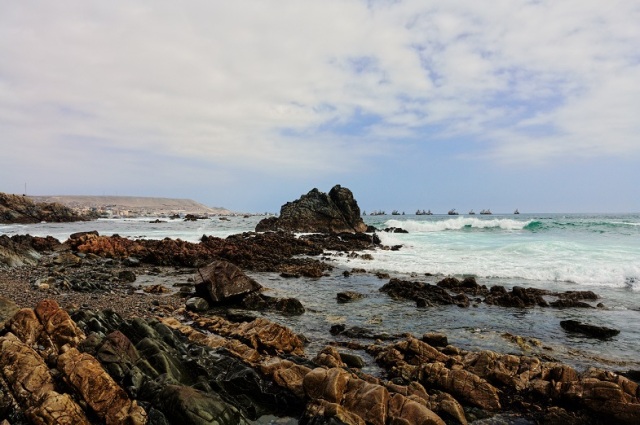 Waiting the sun of the west 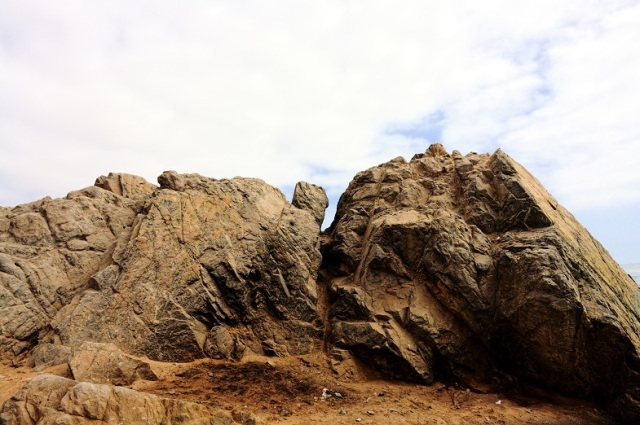 Time runs so I walked till this park, it’s designed with emphasis in preserve the natural rocks. 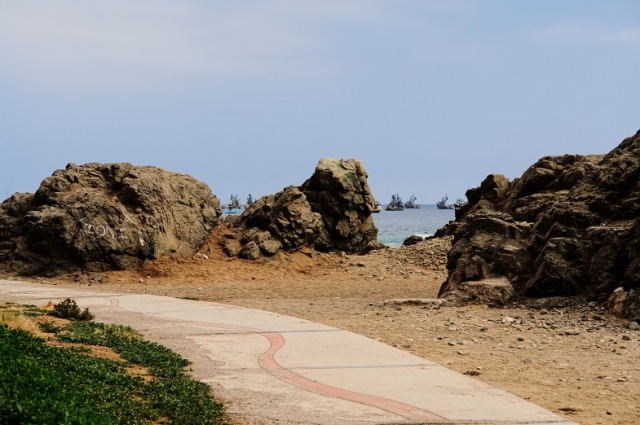 Glimpse to the ships

The artisanal ships of the fishermen crown the line of the sea. They can come so far as 1700 kilometers (one thousand miles) from the North of Peru. 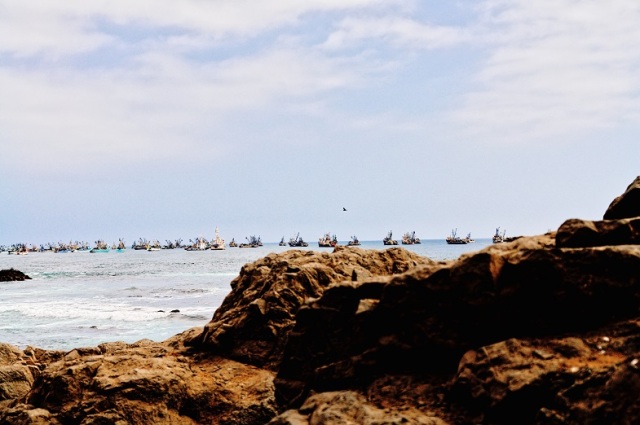 Inside the kingdom of rocks

So it was time to lunch. I went to the fishermen terminal where the fish is fished the same day.  Even more if you are a fisherman or fisherwoman you can bring your own fish to be cooked there. 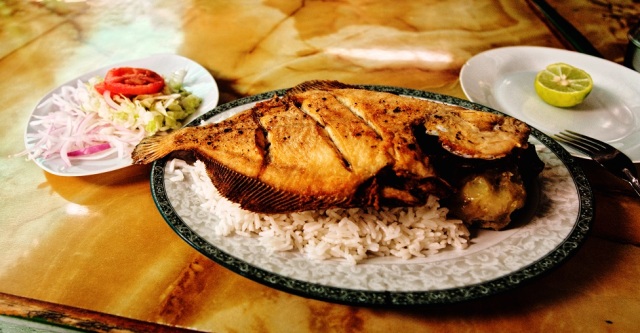 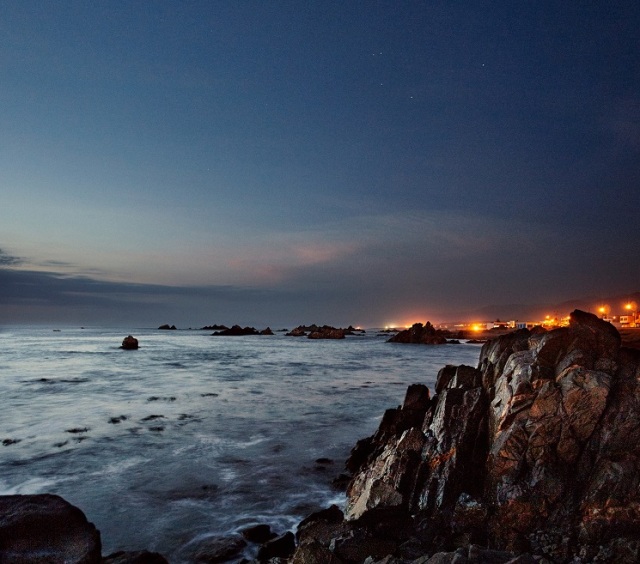 I presented before a similar photograph, but this is actually a photograph stitched from two horizontal photographs, I took one for the sea and another for the sky, usually it’s recommended to take vertical photographs to stitch but the moving nature of the waves could have ended in an imperfect stitch.