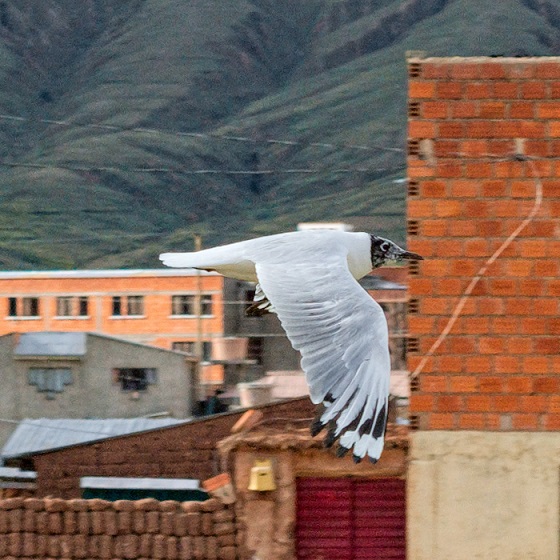 To run without obstacles… just free. This is the kind of place where I used to play when kid. 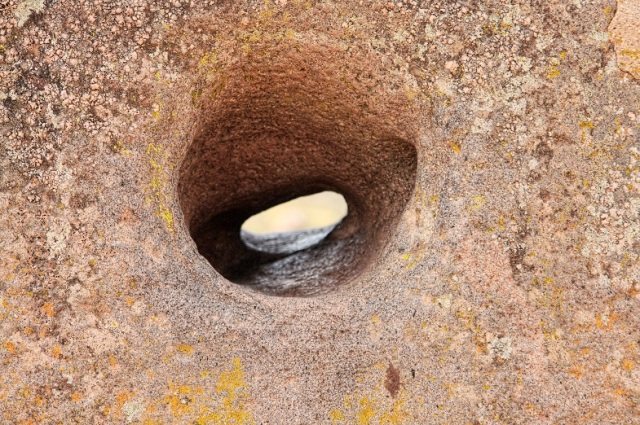 Voices and ceremonial sounds were emited with this stone.

In the old temple of Kalasasaya in Bolivia; it’s said that it was used as a loudspeaker stone. sculpted to amplify the human voice. I have traveled palaces, pyramides and cities of our ancient civilizations but it has to be the only place where I have seen a stone made in that way… 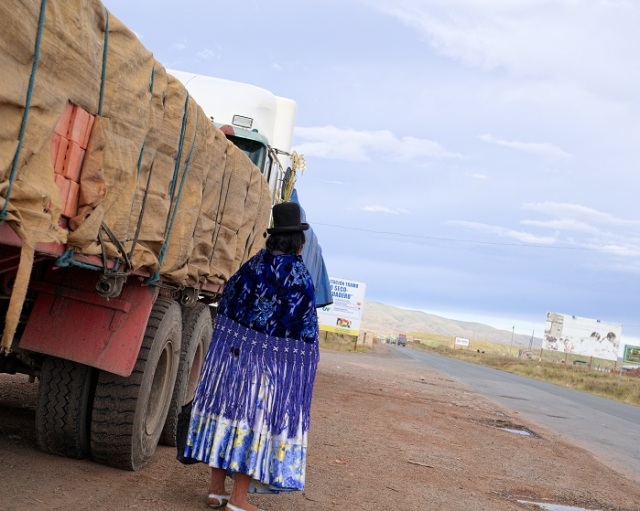 The life waiting in the highways a bus… this is in Bolivia near the Peruvian frontier.

a frame for the infinite

Lake Titicaca is a dying sea, at 3,812 metres (12,507 ft) of altitude. When the capital city of the old Empire, called today Tiwanaku, wasn’t history but a powerful city it had a port near the lake one millennium ago. Today the lake is fifteen kilometres (approximately nine miles) far away, and the city is a broken jigsaw with blogs of different periods and styles.

The empire dominated the Peruvian south, parts of the Argentinian and Chilean north, and the Bolivian west, closer to its end in the tenth century. Basically it was an empire of the highlands and the closer coast. After their fall kingdoms would occupy its place until the emerging of Inca Empire in Qosqo (Cuzco) in the fifteenth century.

But not everything is history. After the Spanish invasion we still conserve our traditions, etiquette, way of thought, despite the contemporary governments the language, actually the people culture. The most damaged part was the higher culture in science and arts. But that is a story for another day.

Kalasasaya covers an hectare and parts are closed due to archeological investigation, but still it’s a beautiful place. The soldiers, priests, government, and powerful men are replaced by archeologists, local workers and tourists. There is a little town near with hotels. The entrance fee is cheap, I think as a foreigner for the whole Tiwanaku I paid more or less eighty Bolivians, what translates to not even fifteen dollars. Almost nothing to see ancestors.

The sky is amazing, isn’t it? 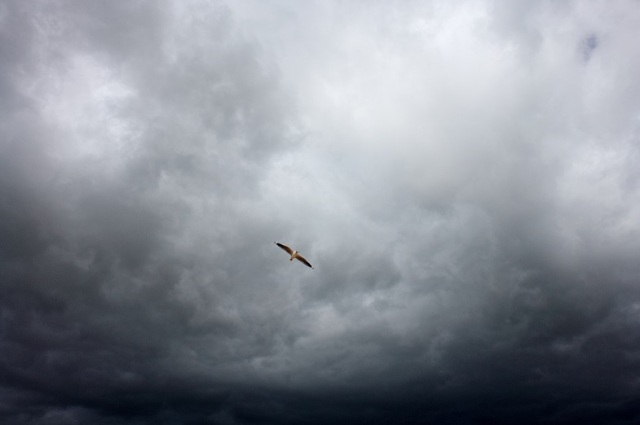 flying in middle of the storm

ears for the storm

This is Ponce stela, named that way in honor of the archeologist that discovered it, Carlos Ponce Sanginés. As you can see it has its shoulder marked with a cross. That means that it was known by Spaniards and that was a way to practice an exorcism in the Lord. Fortunately it was buried but not destroyed.

Akapana although looks like a hill actually it is a Pyramid. According to Wikipedia a Spaniard called Oyaldeburo destroyed it in the eighteenth century searching treasures, unconscious that he was destroying the architectonic treasure. Originally it was finished with ashlars and there was a temple in shape of Chakana in its top (a Chakana is a sacred symbol in the shape of a cross with arms of the same length) and sculptures. The adobe shape is a modern work of reconstruction. I prefer it that way, so I know that is original and what an hypothesis. 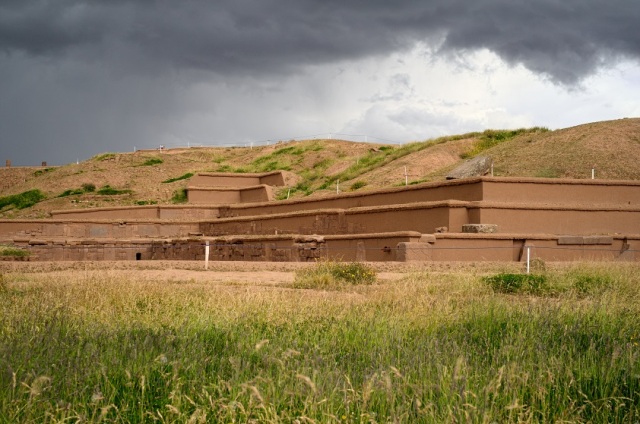 Akapana remains and the storm

a mirrored structure above it 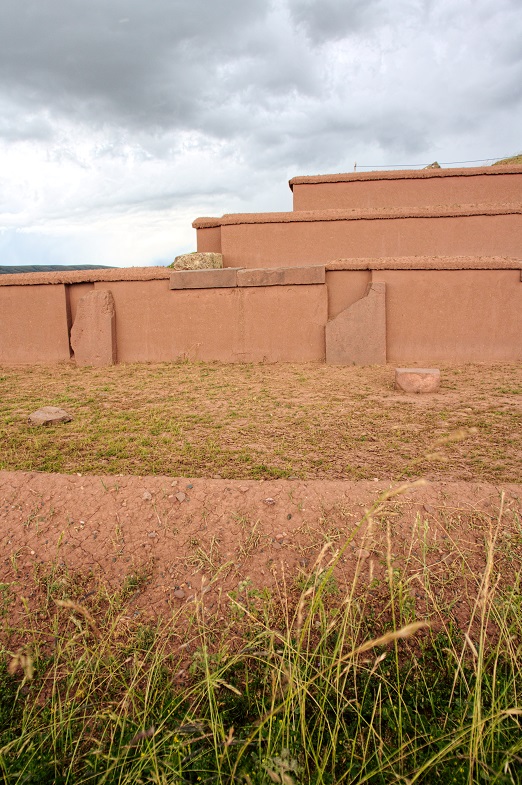 a bit closer to the pyramid 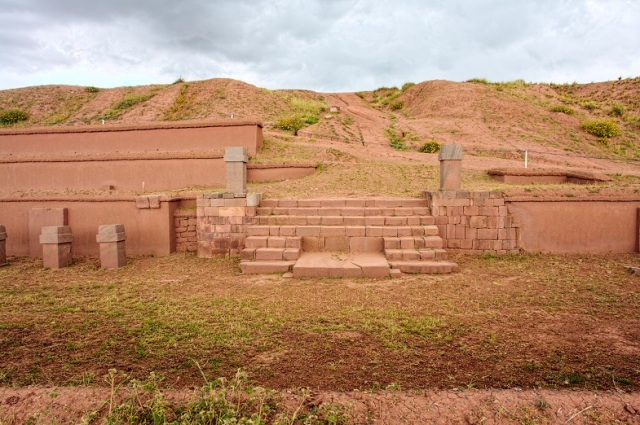 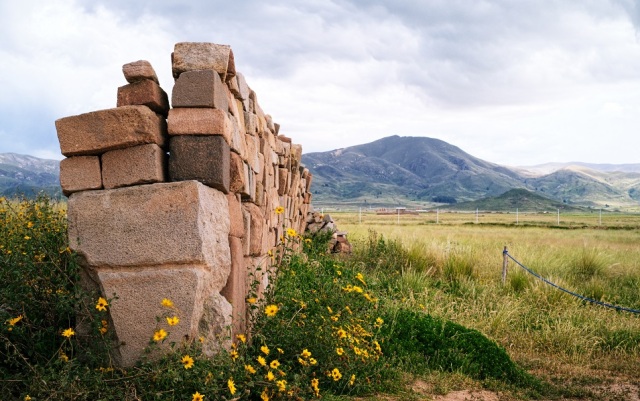 flowers for a dead king in Akapana 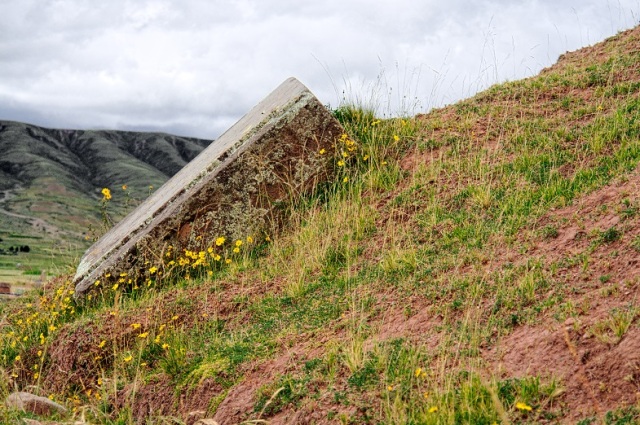 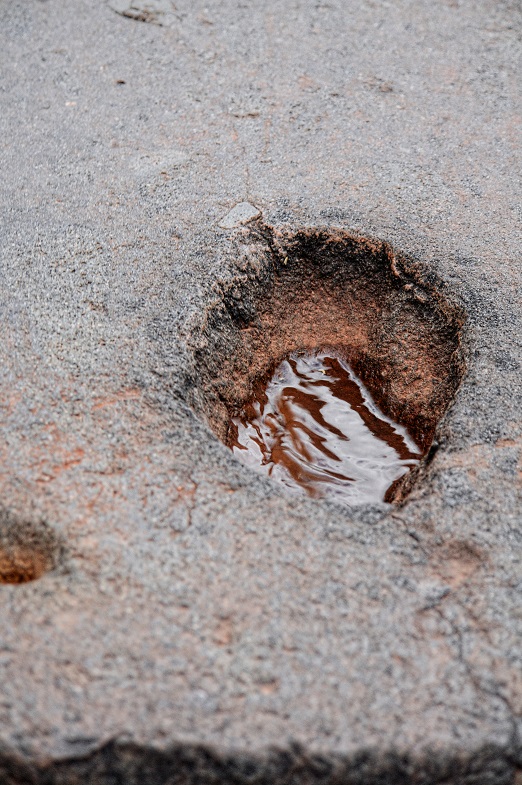 the invisible made visible

The wind was stronger. I had saw, besides me, five tourists more. But with the wind I didn’t see them anymore.

road to a secret 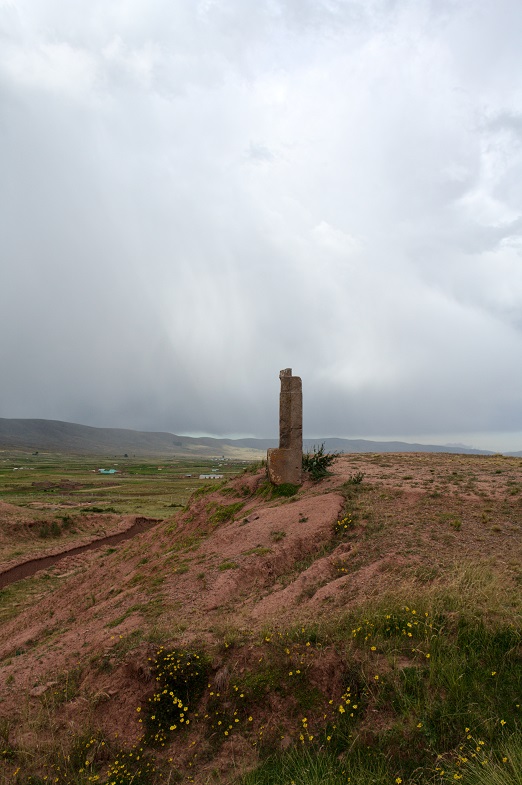 The wardens told me that the time was over. I walked the road to the highway to take a bus to come back to Peru. A last glimpse to the ruins showed me a rainbow, someday I could get back. 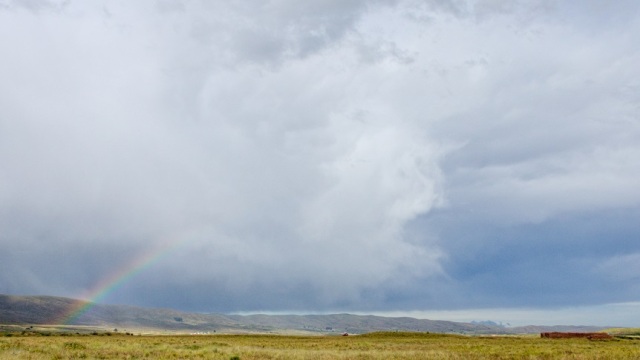 collision of a rainbow 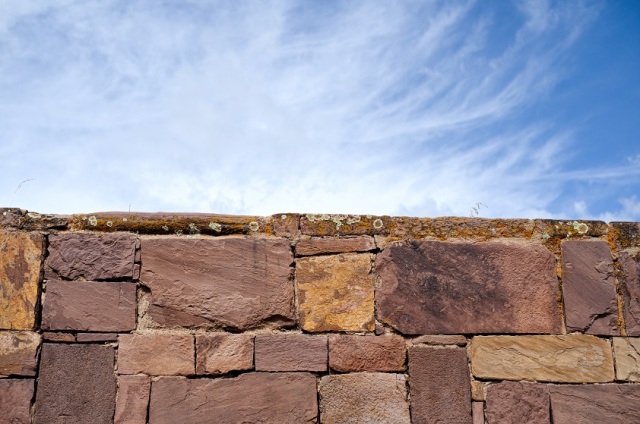 Last year I went one day to Bolivia, living in the frontier has its advantages so actually to me is quite cheap to go to La Paz, the Bolivian capital, than to Lima, the Peruvian capital. Practically is like use public transportation, it’s in customs where one loses a little of time.

I wanted to go to Tiwanaku. Its the capital city of an old empire whose history probably spans from 2500 years ago to the year 1000 AD. Similar to Greece when it was under the attack of the People of the Sea it disappeared under the pressure of invaders from the south, the empire ended divided in several kingdoms and it seems that the invaders adopted the culture of the invaded. It’s probable that the Inca nobility would migrated or could have had bonds with the remains of that empire but the history is hard to tell. The tough weather and the extension of the empire made possible technological advances in agriculture, environmental control, architecture and metallurgy.

Even the name is not the original one, Spaniards asked to people the name of that city but because they couldn’t understand their languages they say just that was a dry shore, and is what is called now. The same happened with the name Peru because our empire was called Tahuantinsuyu but instead they used a word from the north to say river that was what they seemed to ask us when they pointed to a river in the frontier.

Tiwanaku has several temples and sections, I hadn’t time to visit the museum and Pumapunku (in quechua means Lion’s Gate) because I want to know with calm, so instead to run to see a glimpse of everything I took my time to see and appreciate better a little.

Kalasasaya is a temple that covers an hectare and in its top has the Gateway of the Sun and two monoliths.

a flower for the builders

See the photograph above, if you see the two holes in the extremes of the tilted stone those are the “female” side of an ashlar to connect with two “male” protuberances in the next ashlar. That technique would evolve across the centuries till the refined perfection of Imperial Style in the Inca Empire. 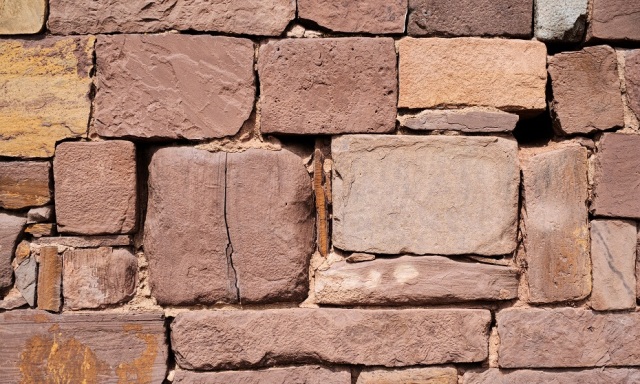 In Aymara we call to our America “Aywi Yäla” I have to clarify that to English speakers America is the country of USA and well, that’s correct, instead to us in the South America is the name for the lands from the Chilean and Argentinian side to the north of Canada. I read that they don’t use America because South America and North America are different continents but I think then they wouldn’t recognize Europe or Asia but just Eurasia. In any case are different traditions. 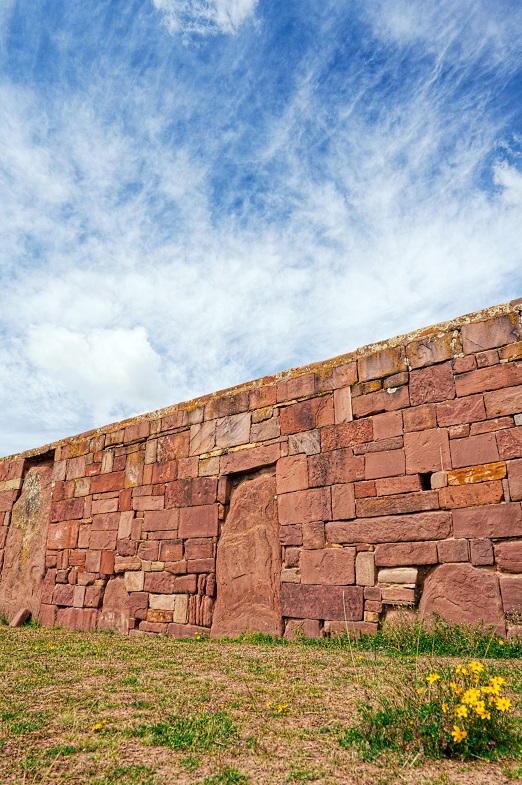 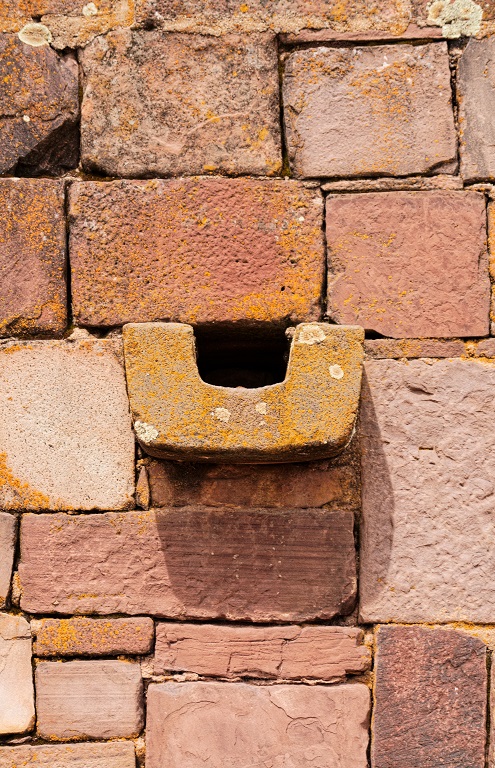 The dry lips of a gargoyle (above). 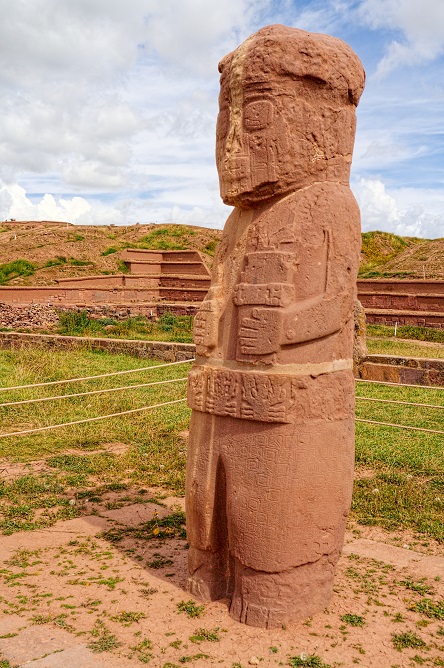 The figure above corresponds to the monolith “Fraile,” I don’t know why some people would damage it, there are some letters in Spanish language. Perhaps children from schools, perhaps just tourists in automatic mode, that don’t think the gravity of their actions.

face of a stone

Clouds of storm were traveling faster. It was clear that the sunny day was coming to an end. 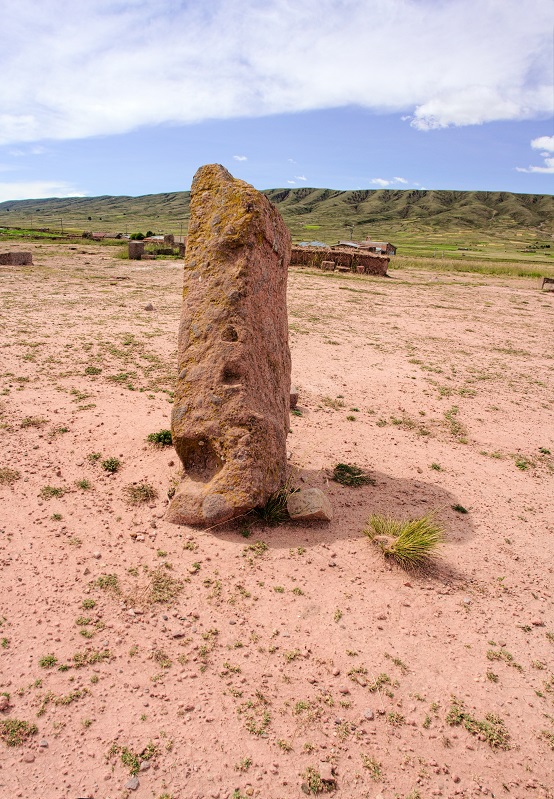 The Gateway of the Sun 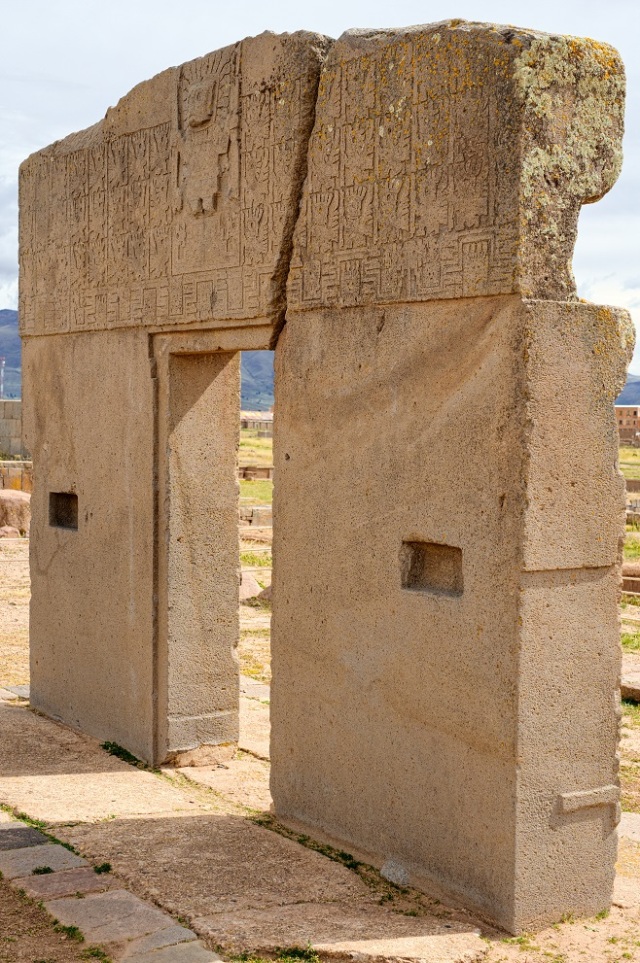 the future is at our back

This threshold probably was part of a bigger temple. It’s believed to be related with astronomy. According to my traditions as native the only thing I can say for sure is that it represents a Lord of great power surrounded with a big amount of sacred symbols that multiply the meaning of his/her greatness. As an architect probably it was laminated with decorated metal plates and the door was not open but it had a wooden door to seal the interior. If I could get its original location I could calculate if it coincides with utilitarian sun positions, but it’s in a different position so if you read that it marks the sun as seen nine thousands of years ago it is based in distorted data.

In the holes there are marks like crosses, usually they are used to set metal, a frame perhaps. 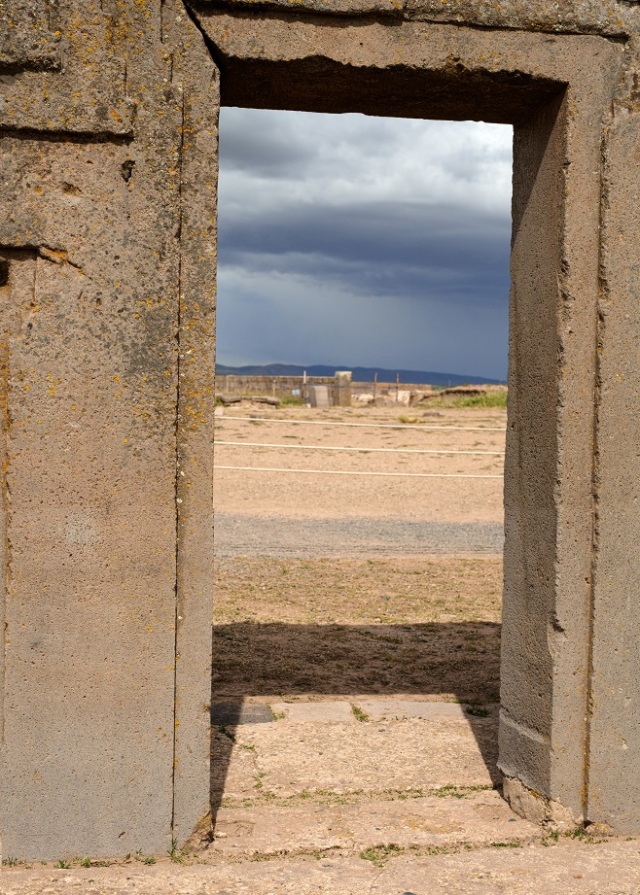 door to another world 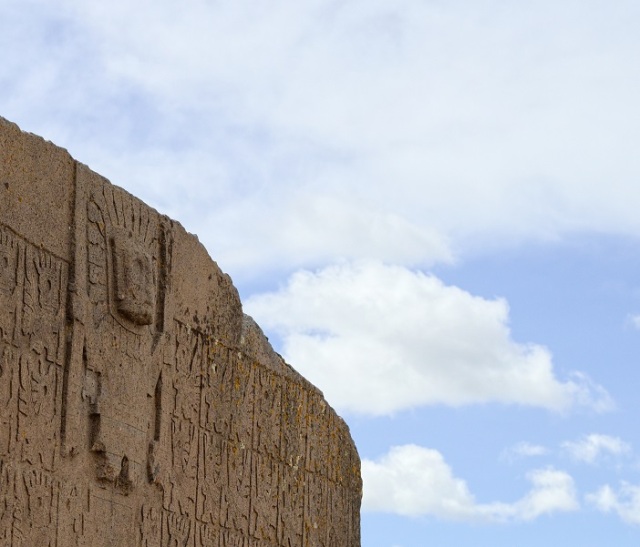 a temple in the nature 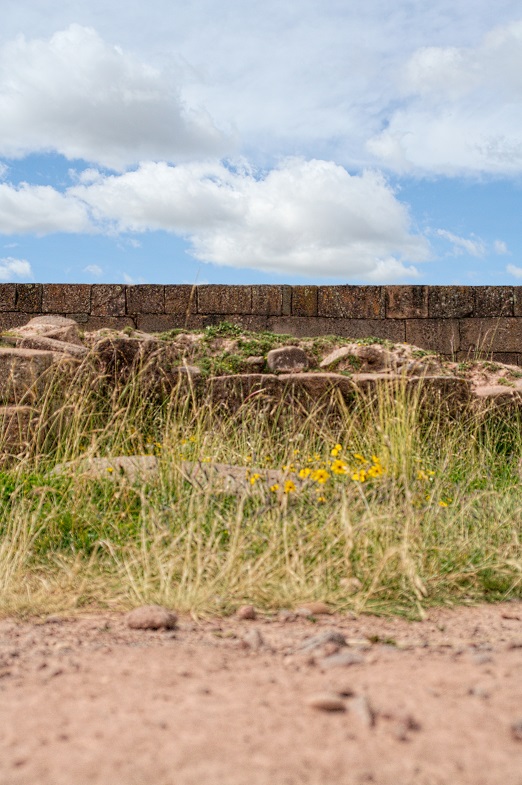 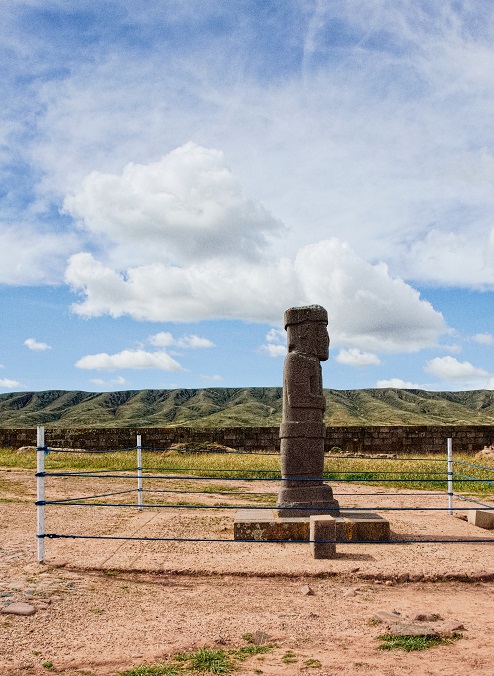 mind in the sky

The photography above corresponds to the Ponce Stela. It is the frontier between the blue day and the storm clouds.The next week I’ll publish the stone temples under the clouds. But as a highlander I knew that it wasn’t to rain so I keep walking.

A bouquet of wild yellow flowers in the Temple of Kalasasaya in the Bolivian side of our highlands.